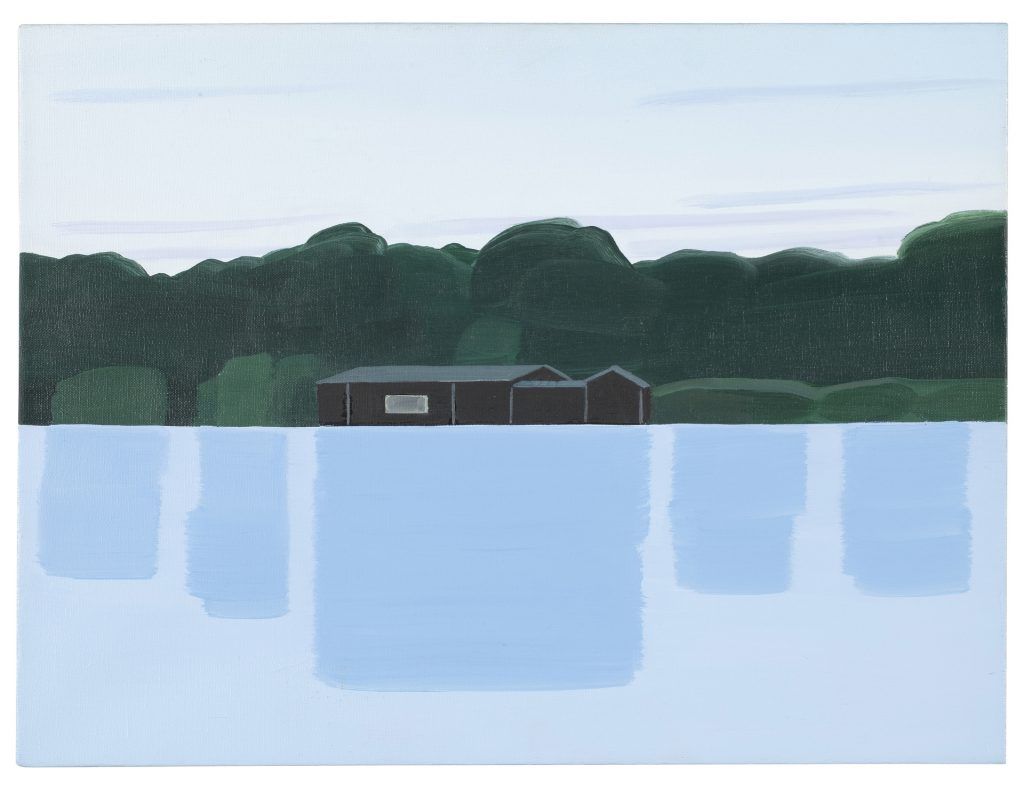 Cottage by the Lake I

Signed and dated (on the reverse)

Purchased form the artist in 2007

EP: The European Parliament exhibits your painting Cottage by the Lake. Is it a real landscape and, if so, do you have a personal relationship with the place?

PETR MALINA: Cottage by the Lake is inspired by a real-life cottage located on the shores of Lake Serpentine, in London's Hyde Park. In the spring of 2000, I was on an Erasmus exchange at Middlesex University in London. I was completely captivated by the city and its mood, cultural possibilities and architecture, which are quite different from mainland Europe. I spent two months on an internship, and when I wasn’t at school I just explored the city. City parks were among the most interesting places I discovered in London. Hyde Park is quite specific. I was fascinated by the flowering beds of variously coloured tulips and other flowers, the structure of the park and, of course, the Serpentine lake – the main landmark attracting people passing through this park. It was an inspiring place for me, and the motifs from this place became the subject of many of my later paintings. In 2005 and 2006, I realised a series of paintings called The London Eye. Cottage by the Lake is part of this series.

EP: The Czech artists represented in the European Parliament were chosen by the Ševčík couple. What is your relationship to them?

PETR MALINA: Sometime around 2007, the Ševčík couple approached me with the idea of creating an art ensemble representative of contemporary Czech art for the European Parliament. Of course, I was pleased. Mr. and Mrs. Ševčík are among the most important art historians of their generation, although they were only free to fulfil themselves after 1989.

Both worked as teachers at the Prague Academy. Jiří Ševčík was the first director of the Trade Fair Palace – one of the flagships of the National Gallery where the art of the 19th, 20th and 21st centuries is presented. In the 1990s and 2000s, they realised several large and fundamental exhibition projects of contemporary Czech art. They fundamentally influenced a whole generation of middle-class theorists working today. So, the moment Jana and Jiří Ševčík approached me, I didn't hesitate. The circle of selected authors convinced me that it would be a representative selection. They chose the painting Cottage by the Lake. It is one of my smaller paintings, but at the time I was one of the youngest artists. It was only a few years after school and I was grateful for this painting to be selected for such a collection.

EP: How would you compare the educational system of the Prague Academy of Fine Arts with that of the schools you attended in Germany and Great Britain during your internship studies?

PETR MALINA: I spent seven years at the Academy of Fine Arts in Prague, from 1994 to 2001. This was a crucial and formative period for me. The Academy is not only the oldest Czech art college, but also the most prestigious when it comes to free art. Czech art leaders have always taught it, both historically and today. I went to the painting studio of Jiří Sopko, one of the fundamental painters of my generation and a member of art group 12/15. I also spent a year in the studio of Jiří David, one of the members of the younger postmodern art group Tvrdohlaví. At the time, great personalities of today's art scene attended the Prague Academy. The school was also packed with students of the older generation who could not study at the school for various reasons before 1989 – when the country was still under the waning communist regime. The school was – and still is – very traditional. There are painting, sculpture, graphic and restoration studios and it was really an oasis for unfettered talents. Later in 1998, I completed a two-month internship in Karlsruhe at the Akademie der Bildenden Künste, and then again in 2000, a two-month internship in London at Middlesex University. I was able to complete both thanks to the Erasmus programme, and they were absolutely essential and formative for me too. For the first time, I was abroad for a significant duration and could get to know a different culture in-depth. The school in Karlsruhe, Germany was rather classic. It was conceived similarly to the Prague Academy with clearly focused studios (painting, drawing, graphics) led mostly by a professor and assistant. In contrast, London's Middlesex University had a slightly different system where students from different disciplines worked together in one larger space and were not separated into individual studios. Unlike the Czech Republic and Germany, this school had a system of assigned tutors, each with their own group of students, regardless of the medium in which they worked. Students also had to get to know and master all possible art techniques (painting, sculpture, object, photography) during their studies, so that they could master the craft. Only in the diploma thesis did they choose the expressive medium in which they wanted to keep working. Both systems have their advantages and disadvantages, however, the more traditional continental one was closer to me.

EP: Who influenced your work the most?

PETR MALINA: I must definitely mention my professor Jiří Sopko, with whom I studied in the studio for six years before I finally graduated in 2001. He is a prominent representative of Czech grotesque. Among other Czech painters, I will mention Antonín Střížek or Tomáš Císařovský. And from abroad there are, for instance, Edward Hopper, David Hockney and Eric Fischl.

From the same artist

Back to the Spotlights